Another sunny Read Regional day. I was greeted by birdsong as I stepped off the train at Kirkby in Knowsley and by these glorious Storytelling Thrones when I reached the library.

As well as the above Golden Eagle and American Eagle there is also a lovely white Osprey. A sign next to one of the thrones read  – “If you stand still in Kirkby someone will come over and tell you a story” – which turned out to be wonderfully true!  There was also a large pink throne in the library itself and I was very tempted to conduct my talk from up there but feared I might be lost in its huge embrace. 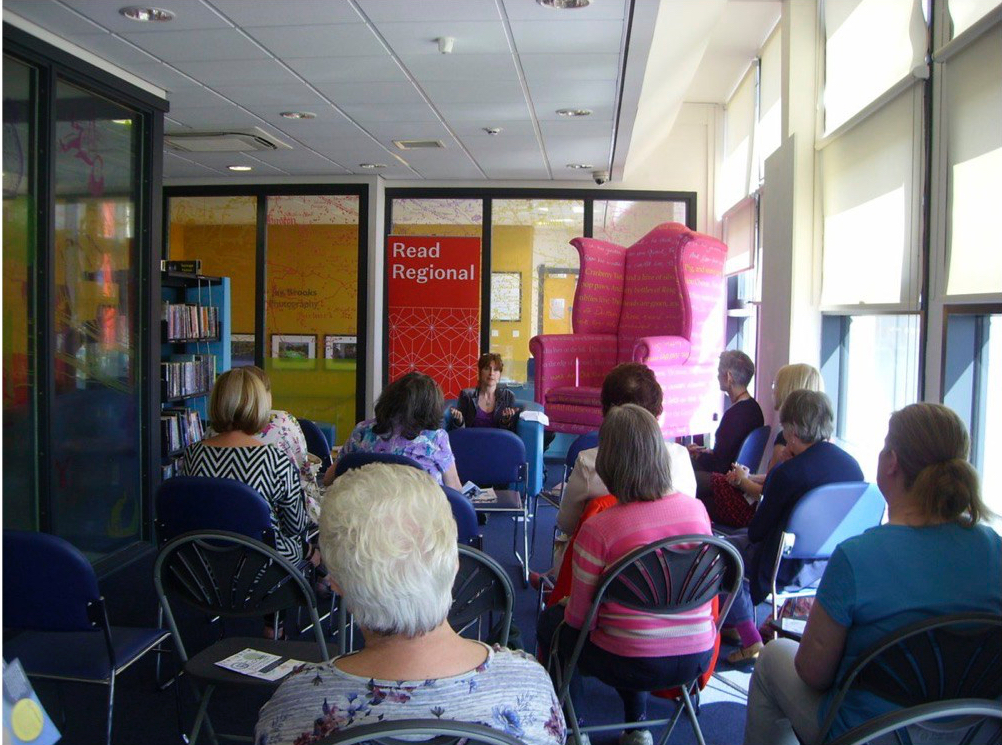 It was lovely to meet the Kirkby readers, who as well as telling me some stories of their own also asked interesting questions about my writing process. One of the unexpected but welcome things about doing Read Regional is how it has helped me to reflect on my writing and to see it through new eyes. As well as discussing the complexities of writing a dual time novel (which thankfully the questioner said she thought was done very well in The Companion) I was also asked about the process of turning an idea into a novel.

In both cases I began with a character – Billy Shaw in The Companion and a young policewoman called Lilly Hathersage in my new one.  Billy’s voice came to me quite easily and  I knew a lot about him before I started writing – where he’d grown up, what he was passionate about, what his dreams and ambitions were.  But just having him growing up happily at the Pleasure Palace wouldn’t have been much of a story. The 1930s personal advert I found asking for a ‘Child Companion’ for a young boy sparked the change and conflict for my story – Billy would be thrown out of the world he’d always known into a challenging new one.

So the answer to the question of how I turn an idea into a story or novel is that I place a character that I have developed into a challenging situation and then let him or her show me how they going to deal with it and how they are going to overcome difficulties to still try to achieve their desires.

Kirkby library is in the Kirkby Centre, which is also home to an art gallery which at the moment has a stunning exhibition called ‘Approaching Thunder’ featuring 1940s British prints and drawings on loan from The Hepworth, Wakefield. It includes some incredibly moving pieces from the war including one of Henry Moore’s air raid shelter drawings ‘Four Grey Sleepers’.

And these watercolours by Paul S. Sharp

The exhibition is at the Kirkby Centre until 28th April and then it is on a national tour – well worth trying to catch it if you can.

My train home was cancelled and there was an hour’s wait until the next one. It being such a gloriously sunny day I decided to use my time wisely and sat in a beer garden with a glass of cider and my current read, David Lagercrantz’s ‘The Girl Who Takes an Eye for an Eye’. A perfect end to a lovely day.

And then on Thursday I’m in Hexham for an Author Talk and Creative Writing Workshop as part of Hexham Book Festival. The workshop is fully booked but there are still tickets available for the talk in the evening