I was North East bound again this week for my Read Regional author talk at Wideopen, Library in North Tyneside. Train to Newcastle (on which I started reading ‘The Bricks that Built the Houses’ by Kate Tempest, which I need to finish in time for Book Group the following evening) and then a short bus journey up the Great North Road.

I got off a couple of stops early to visit Sacred Heart Church in North Gosforth to have a look at their Pre-Raphaelite stained glass. They are really worth a visit. The East window is a gorgeous three-panel design by Edward Burne-Jones.

It was a beautiful sunny day and the colours shone like jewels (something that my phone camera has failed to replicate!)  I particularly love the sinuous shape of the groups of angels on either side of the main panel.  There are several other Pre-Raphaelite windows in the church, including this one by William Morris depicting Boaz and Ruth. 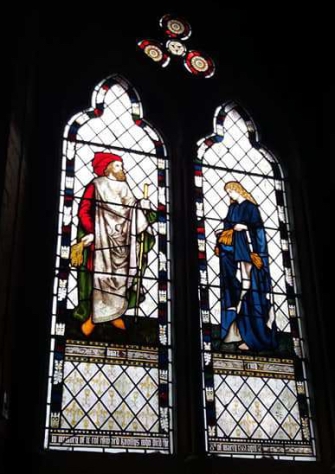 In the Christian Old Testament the meeting and marriage of Boaz and Ruth marriage is briefly described. Hebrew texts give more detail including the fact that when Boaz was awoken from his sleep by Ruth, he was convinced she was the devil. He was reassured when he touched her hair, because devils are bald. They were married, but he died the day after their wedding.

A pleasant walk then up the road to the village of Wideopen, apparently named because of the wide open fields that once lay there.  Wideopen colliery opened in the 1820s and   was sketched by the coal fields artist Thomas Hair in 1844.

I was a bit early for my event and the library was closed for lunch – which gave me chance to sit in the sunshine and read some more Kate Tempest!   The library is full of light and has a gorgeous children’s area. The librarians were lovely and welcoming and we had time for tea and biscuits before people arrived.

Read Regional has been such a fantastic opportunity to engage with readers and Wideopen was no exception. A lovely friendly audience who made me feel very welcome.

After my book chat and readings they asked lots of questions including what made me decide to have Anna Sallis, one of the main characters in The Companion, come from Tyneside, where before she had worked in a social history museum. I think my own roots in the northeast must have played a part and also perhaps my memories of Beamish Museum in neighbouring County Durham – but ultimately that was just where Anna ‘told me’ she was from!

Homeward bound I stopped off in Waterstones in the centre of Newcastle and was delight to find The Companion along with this bookseller recommendation (and a miss-shelved Stella Duffy!) 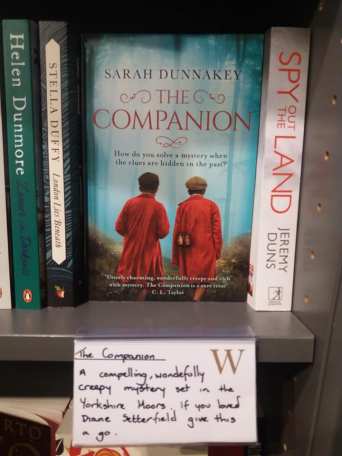 On Friday morning I’m heading westwards for a change –  I’ll be at Kirkby Library in Knowsley, Merseyside at 11am